When visiting Andalucia, make sure you visit a really special riding stable with Andalusian pure-breds and Arab-Spanish horses. The place, called Los Caballos del Mosquin, is situated near the small, picturesque mountain village of Canillas de Albaida, near Malaga. The backyard of the stable is the doorway to a wonderful national park. Riding there up into the mountains feels like flying and riding Pegasus himself. The scenery is breathtaking and the rides are guided by Eva Maria Sigvardt, a Danish horsewoman who has lived in Andalucia for many years now.

Here, Eva Maria talks in her own words about life in the mountains.

“I run a riding stable and we offer trail rides on our horses. My beloved horses and I try to do our utmost to give the riders, on all levels, an unforgettable experience in the surrounding nature and through having harmony with the horse. The horse is the key here, showing the rider their own natural abilities and this can only support a rider’s confidence.

“We have worked to turn the conventional concept around. Here it is not the rider dominating the horse to do what the rider wants of the horse, but the horse instead who shows the rider what it is able to do with the right communication from the rider – and always in the horses’ own language.

“Our horses do riding lessons, but only individual sessions and it is always with an air of natural horsemanship – there is no room for violence here. Instead, through friendly and positive communication, we try to achieve the highest level of Spanish classical school in dressage. That is our message and our concept.

“And that is also what I try to teach my own daughter, Africa, who is seven years old and the new generation. She is the best master that I could ever want! Children have that ability to tell you, without prejudice, when something is not fair.

“As a single mother and businesswoman in a male-orientated country such as Spain, life can be hard. And Africa is teaching me more about understanding communication between animals and humans than you could read from any book or any man could tell you. And it is not just Africa – children in general can teach us a lot about communicating with or understanding animals. I think it is because children observe much more than we often do, they have less prejudices and they are more logical, just as most animals. Africa has taught me that we need to use more common sense and intuition than turning things into mysterious problems to solve.

“To illustrate with a simple anecdote: I go to a horse and talk to it. The horse puts its ears back and does not show any sympathy for me.  I wonder and feel a bit confused – why is this? Africa will then call to me from a distance away ‘Mom, don’ think it has anything to do with you. The horse has an argument with the horse behind you. Can’t you see that they are talking together?’ It is all about gaining a different perspective.

“I ended up in Spain working in a completely different field, in the oil business on the spot market for a privately owned company in Madrid. Before that, I was an executive secretary for Sterling Airways, Denmark, and already had some experience of the oil business. Eventually, I bought an old finca to renovate in a remote place of Spain. That was 25 years ago and I decided to renovate the finca as a contrast to the hectic business city life I was living.

“For instance, here mules are still used as an important means of transport and work and I wanted to live in a way that provided me quality of life. So after five years working in Madrid, just spending my leisure time here at the finca, I decided to stay here permanently. Initially, I worked as a real estate agent for a year  starting on my own as an agent and developer.

“I have been working with horses since I was six years old and I have been giving riding lessons since I was 10 years old. I ran my own riding club in Denmark until that life was interrupted by studies, a career and travelling for around 12 years. I don’t believe in living off horses as a business, at least I haven’t been able to. But I do see it as a justified hobby and a lifestyle.  “Regarding Arabian blood added to or mixed with the Spanish horse, I think that it gives much more strength and stamina, especially for the work that they have to do here, trekking in and over the mountains. Also the character of the Arabian horse makes the cross a lovely one to work with. “I only breed on a very small scale and have spent some time studying the bloodlines and after such research, I was able to breed a few very good mares to breed from. My stallion, Gorrion is a wonderful horse and was a superstar abroad. Today, he is the star of our own finca and he still has a lot to offer to riders at any level.” 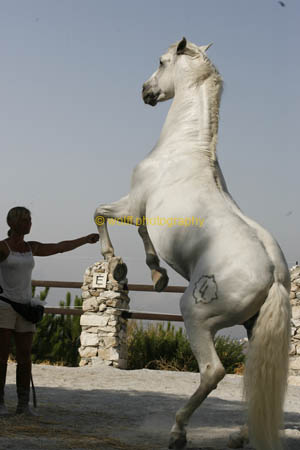 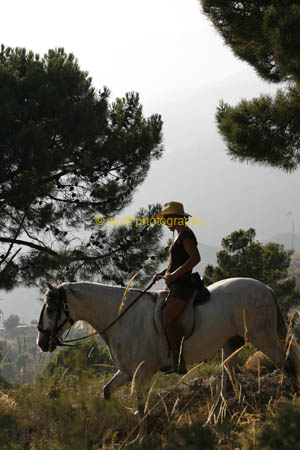 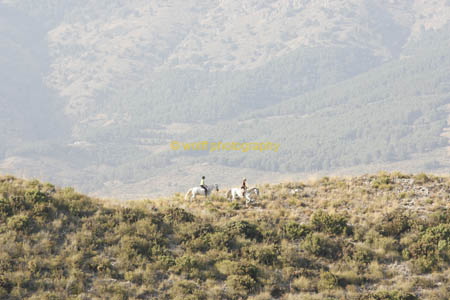